Have you lost your senses?

This entry is part of a recurring series called Use It Or Lose It that looks at those things that didn’t make the evolutionary cut and have been lost in modern species. 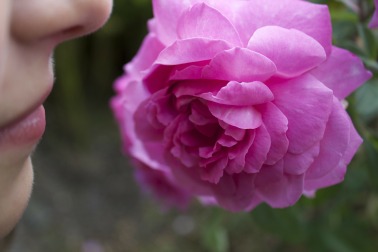 The human nose can detect a huge number of compounds and often in small amounts, but genomic analysis tells us our sense of smell isn’t half what it used to be. Photo by Kerstin Herrmann.

As I’m reading, I inhale deeply and catch a myriad of scents. The fresh clean smell of my laundry drying across the room, the damp earth in the houseplant on the table in front of me, and the first promising wafts from the bread baking in the kitchen that are almost enough to drown out the decidedly funky odour coming from my wet wool jacket hanging by the door. All that from a sniff makes it hard for me to believe that on an evolutionary scale, humans have lost their sense of smell.

The sense of smell works more-or-less the same way in most organisms. There are olfactory receptors, often localized in a sensory organ, like the nose, or a snake’s tongue. Each receptor is specialized and only a few compounds can activate it. When a compound activates the receptor, it sends a signal to the brain that is interpreted as a smell. The gene family encoding olfactory receptors is the largest in mammalian genomes, and there are more than 900 genes in the human olfactory receptor gene (ORG) family. However, research shows that at least 60% of these genes have mutations making them non-functional, meaning that our sense of smell has diminished significantly. 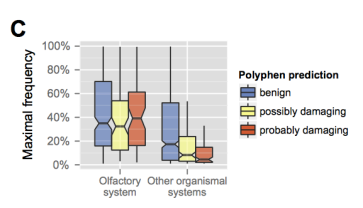 In humans, olfactory receptor genes accumulate higher numbers of function-damaging mutations than other types of genes, indicating that negative selection is relaxed, and these mutations don’t affect the overall fitness of humans. Graphic from Pierron et al. 2013.

The human genome is subject to both positive selection, in which natural selection increases the frequency of a gene variant, and negative selection, in which natural selection decreases the frequency of a gene variant. Negative selection typically constrains the genetic diversity of gene families by decreasing the frequency of gene variants that interfere with the function of that gene. However, in humans, negative selection on the ORG family is relaxed, meaning that ORGs accumulate more deleterious mutations than other types of gene families. This indicates that gradually losing their sense of smell hasn’t affected human’s fitness, and that our olfactory abilities may still be in evolutionary decline. Scientists at the Max Planck Institute for Evolutionary Anthropology suggest that there may be a single driving evolutionary force that is responsible for our diminished smelling abilities: our eyesight. They compared the proportion of non-functional ORG pseudogenes in different primates and noticed that the evolution of trichromatic vision corresponds to a decline in smelling ability. In humans, old world monkeys and apes, and the new world howler monkey, the eye has three different colour receptors, allowing us to see things with greater discrimination than is possible with only two colour receptors. With such acute eyesight, primates no longer needed to rely heavily on their sense of smell to locate food items, and as a result there has been little negative selection preventing the degradation and loss of function of ORGs. 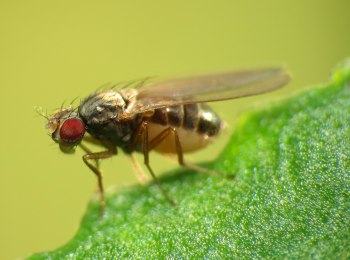 The fly Scaptomyza pallida has transitioned from a yeast diet to a plant-based diet and lost some of its sense of smell in the process. Photo by Katja Schulz.

However, improving eyesight isn’t the only thing that can drive an organism to lose its sense of smell, and this simple explanation for our decreasing sense of smell is strongly contested. Genomics researchers using other approaches to study primate ORG evolution have failed to find any connection between the evolution of trichromatic sight and a degradation of ORG function in primates. So what other factors act on the evolution of an organism’s sense of smell? Wider analysis of ORG families across mammals has demonstrated that adaptation to specific habitats drives ORG evolution, and that olfactory repertoires reflect an organism’s adaptation to a terrestrial, aquatic, semi-aquatic, or flying lifestyle. In insects, a simple diet change can alter a species sense of smell. Those pesky fruit flies that seem miraculously able to find the single pomegranate seed that escaped notice under the toaster and use it to launch a full fledged invasion of your kitchen? They have a highly adapted sense of smell that includes a number of receptors for the volatile compounds given off by yeasts growing on spoiling fruit. However, when the genus Scaptomyza diverged from these fruit flies, it developed a herbivorous diet. Since switching to salad, Scaptomyza species have lost their ability to detect yeast volatiles, and instead have gained a whole host of other receptors connected to smelling out plants. Loss of smell in human evolution is probably not a cut and dried case of eyes-over-nose, but more likely a complex interaction of factors that have contributed to make a keen sense of smell less important to our health and survival.

This entry was posted in Use It or Lose It and tagged adaptation, evolution, genomics, human, insect, smell. Bookmark the permalink.